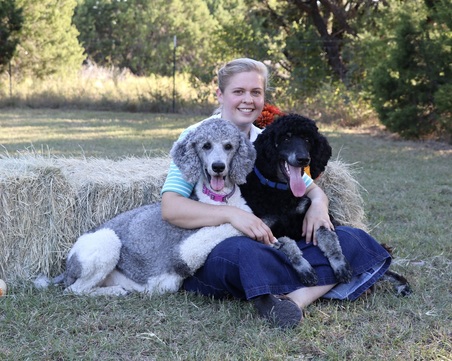 ​ ​Having grown up with a happy, sweet mixed breed dog, I didn't own my own dog until in my teens. She was a Golden retriever named “Lady.” During the last few years of high school I enjoyed raising and selling a couple litters of pups. Several years later as I was considering what I wanted for a dog that could be my dream dog, a quiet apricot colored standard poodle with shaggy ears, called “Puzzle," crept his way into my life.

​ I had never been around a poodle before and hadn't even given them any thought, dismissing them as prissy dogs with funny haircuts. But this guy showed me otherwise. My mom tutored a little boy with special needs that lived down the road from us, and his parents and friends had bought him Puzzle to be his companion. Puzzle would come with him for school in the mornings and sleep under the table. As a service dog he was highly trained to stick by his young master but it didn't hinder his friendly, outgoing personality, and his little tail was always wagging. I knew instantly what my next dog would be. After searching high and low for a year I found my Lexi. A silver and white parti poodle. She's proved to be everything I was hoping for. Her gentle, tender spirit makes her irresistible to love on. Over the past two years I've done my best to teach her obedience and some tricks. But we have lots of fun whatever we're doing together. My goal for my puppies is that they would have the same gentle disposition as their mother. My hopes for some of my puppies to become service dogs has begun to come to pass and I now have puppies passing their service dog certification and becoming inseparable companions to their owners. Just like the first little poodle I met.